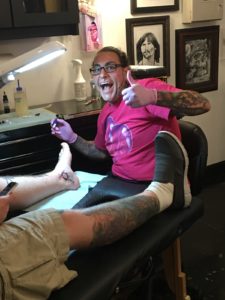 Robbie Ripoll is a man with a plan.

I’m sure you’ve heard the name before. You’re probably familiar with his work from his appearance on SpikeTV’s Ink Master or you’ve seen him floating around on the tattoo convention circuit over the years. But, there’s more to Mr. Ripoll than just his incredible tattoo work—Robbie Ripoll is Rad.

He’s the I’m Rad Movement to be exact.

After running into Robbie at the Tampa Tattoo Arts Convention, I was immediately enamored by his charismatic personality. Every time I passed his booth or stopped by to peek at the piece he was working on, he was smiling and laughing. Although we had only just met, he seemed warm and welcoming—greeting me with a smile, a laugh, or a hug every time I came around. His energy seemed virtually infectious. Recently, we got the chance to sit down and chat about his tattoo career, his home life, and his I’m Rad Movement.

Robbie began tattooing at a very early age. His father owned a tattoo shop, so Robbie grew up around the practice. After bugging his father relentlessly, he was started on a formal apprenticeship path at the startling age of 12. By the age of 16, he was working as a professional tattooer. He is now in his 21st year of tattooing. 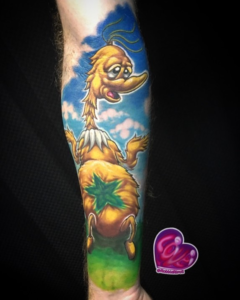 After running his family’s shop for 15 years, Robbie decided to make his own way in the industry. He left the comfort of the established shop behind to launch his own shop in Florida—Chapel of Love. The shop remained open for over three years, but Robbie felt the urge to close his doors.

“Ironically, I decided to close the shop for the sake of my marriage,” he said. “That much stress can take its toll on a relationship.”

While running a shop didn’t seem to be the path for him, fate found Robbie a new route—as a reality show star. Robbie was selected to be a contestant on SpikeTV’s Ink Master. The show was trying something new, putting a spin on the format by creating a Rivals Season. Robbie and his brother, who were feuding at the time, were both among the cast.

Of course, I had to ask—how much of the rivalry was staged for tv and how much was real?

“We were legitimately fighting,” Robbie divulged. “It was personal, not business. But, I’ve grown a lot since then.”

Whenever I meet with contestants of the show, I always find myself wondering how they feel regarding being on the show, tattooing in front of millions of strangers. Does the fame carry on past the credits? Do they get recognized in their daily lives? Here’s what Robbie had to say regarding the experience. 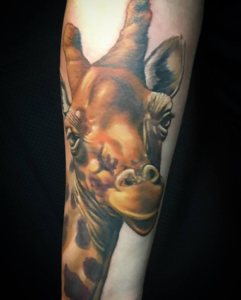 “The show definitely helped my career. I’m now that guy that was on TV. It was weird, uncomfortable, at first. But I learned to embrace it—these people love me, so I just got over it.” He laughed, “Sometimes the waitresses at Chili’s recognize me. I love it.”

As for himself as an artist, Robbie believes being on the show both helped and hindered him.

“It gave me confidence, but also took some away. I made my mistakes in front of everyone, everyone knows. It was a battle.”

While Robbie had closed his shop and pursued other avenues, such as Ink Master, to increase his career potential and protect his marriage, the outcome wasn’t quite what he expected. Over the years, Robbie’s wife had become an integral part of his career—albeit in the background. After a lifetime of her operating in his shadow, the pair came to the realization that their paths were headed in different directions and amicably decided to separate.

Robbie is now currently adjusting to life without his wife.

“It wasn’t earth-shattering. We don’t hate each other. We just weren’t happy.” Robbie stated.

While many would take the change with a bitter pill, Robbie has taken the bump in the road with an enlightened heart.

“I felt like a failure, but I think we were meant to help others through our failure,” he said. 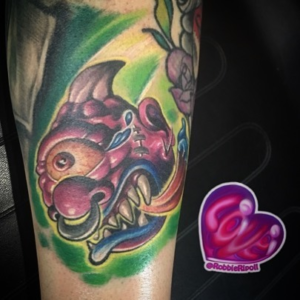 Which brings us back to the I’m Rad Movement.

The concept began over drunken backyard conversations with his friend.

“I’m Rad started back when I was an angry fat kid. I had just broken up with my wife (for a brief period) and I tattooed I’m Rad on myself as a reminder. Hey, I’m Rad. It’s okay, I’m Rad,” Robbie explained.

Eight years later, the tattoo still serves as a reminder and the movement has begun taking root. Now, armed with an active social media presence, Robbie is giving lectures and seminars and offering inspiration to those throughout the tattoo industry.

“We’re [tattoo artists] tough bastards,” he said. “We won’t take the help when we need it. We’ve been accustomed to shame and guilt. The solutions are out there and I’m here to help.”

The movement is aimed at helping people to “be the best version of you.” To be someone future you won’t be ashamed of. He wants to be the ear to the people of the tattoo community and show them that it’s okay to turn to someone when you’re in need or to take a little inspiration from others on a rough day.

“I’d love to be the Tony Robbins of the tattoo world. That’s what I want,” he said, “to reach the tattoo community.”

Robbie wants to urge people to reach out and get a hold of him through his various social media platforms (Facebook, Instagram). He’s there to help or even just to chat. 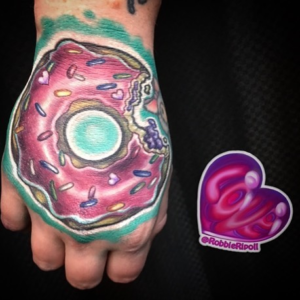 Currently, he’s working on a book entitled, “I’m Rad and So Are You.”

The movement even plays into Robbie’s tattoo work.

“I try to counsel people through it,” he said. “I’m here to make you happy and that means finding the right tattoo for you. I’m in the business of giving you the tattoo of your dreams.”

Robbie wants you to always love the piece you choose, not regret it shortly after. He wants it to be something you’ve considered, something you know in your heart you want.

“I’m not interested in doing the wrong tattoo,” he said.

For those wanting to get a piece tattooed by Robbie, he can currently be found at Operation Ink in Lafayette, Indiana. He is currently accepting new clients and can be reached via email at [email protected]. 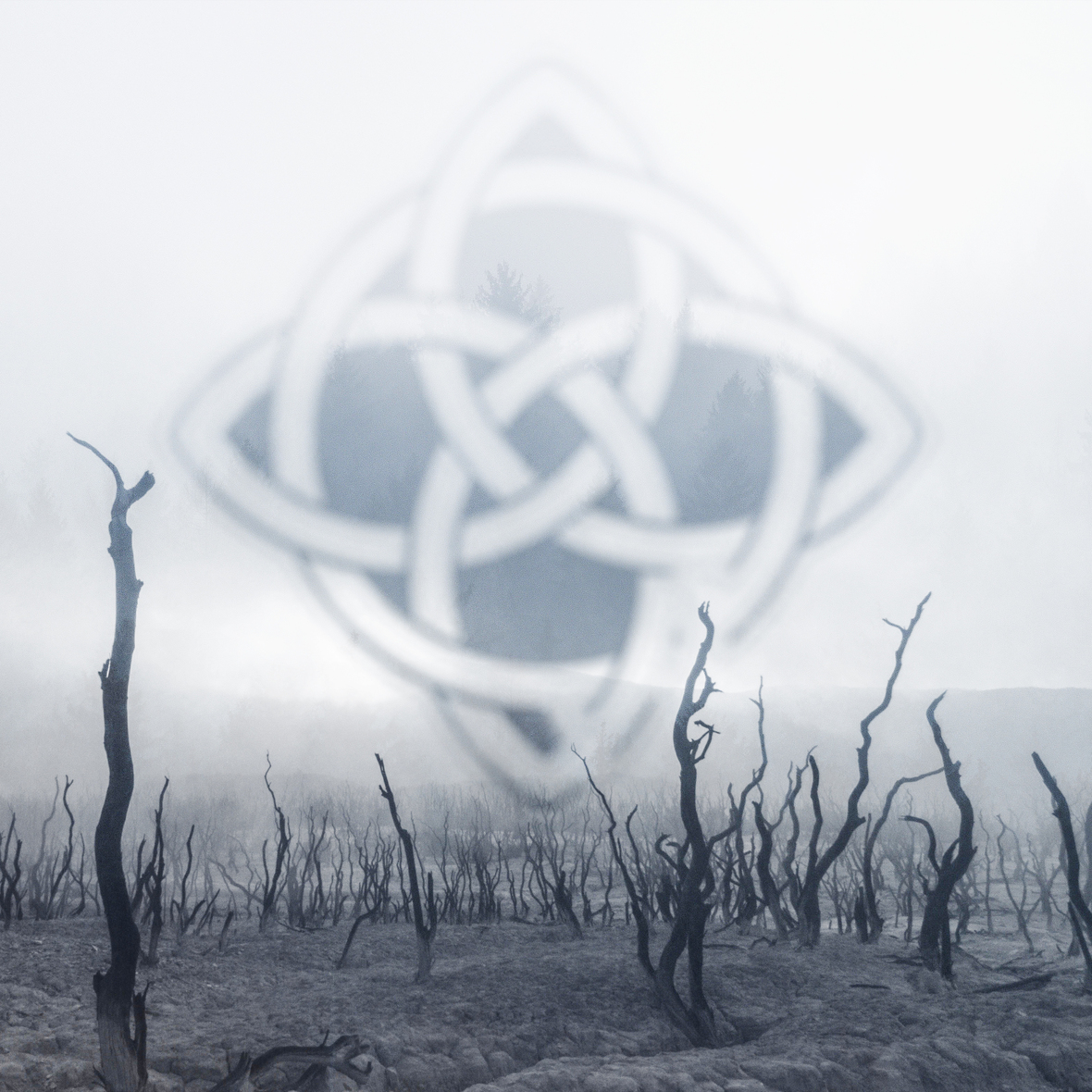 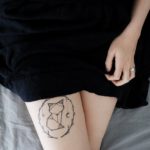 Scratchers—What Are They and Why Are They...