Many cultures across the world have had an on again, off again love affair with tattoos, including Europe, the British Isles, Greece, and Asia. This affair has stretched across the centuries, with what seems to be a steady relationship only recently occurring. In the early stages of history, tattooing was widespread across the Western world as nomadic tribes and ritualistic culture dominated most of Europe. But, as structured civilizations began to evolve and Christianity spread, tattooing became frowned upon and eventually disintegrated altogether.

This gap in Western Civilization’s tattoo history lasted roughly from 776 AD, when Pope Hadrian I publically denounced tattooing as sacrilegious, to the late 1700s. Because this span was so expansive, tattooing was all but forgotten by the time the practice became reintroduced.

With such an exhaustive span of time between, how exactly did the practice fall back into the good graces of the civilized world? It definitely wasn’t an easy feat, especially as most people of the time period were actually completely unaware this practice even existed. Although, some may say it is this pause that actually helped to reboot the practice and clear the air of some of the negative connotations that once went along with it.

In the beginning, when tattooing first began to fall out of favor in the Western world, it was the Romans who paved the way. The Romans strongly believed that voluntary tattooing only occurred among barbarians. Due to this belief, they began to forcibly tattoo criminals, prisoners of war, and slaves. This system spread among the Mediterranean and British Isles as the Romans began to expand their Empire, leading popular opinion of tattooed people into a negative fashion.  However, when Rome adopted the Christian religion, tattooing became a taboo altogether (although that word not be invented until the late 1700s, along with the word tattoo).

As travel became more prevalent, explorers and Christian missionaries set out across the world. At this point, the late 1500s-1700s, tattooing had been essentially extinct, so when they encountered the native tribal communities that resided in the Pacific Islands – or even in South America and eventually, North America – they were completely astounded. Here were people who were covered – some literally head to toe – in permanent inked markings. Their hands, feet, bodies, and even faces were inked in unique, highly detailed designs that held symbolism and meaning beyond what they could comprehend upon first glance.

These designs were documented in grave detail in Captain’s logs, diaries, and journals, such as that of Captain James Cook, who helped create the current definition for the word tattoo. Sketches were drawn and art commissioned by both officers and crew members to be taken back to their homelands. Some of the crew members who made these fateful journeys were so enamored by the art that they opted to get their own tattoos as lifelong souvenirs of their travels.

In fact, one particular sailor – Frenchman Jean Baptist Cabri – was the first European to tattoo his entire body after the disappearance of the art form. Cabri had deserted from his crew during a voyage in order to live among a tribe on the Marquesas Islands. Upon a Russian expedition in 1804, he was discovered by George H. von Langsdorff, who convinced both Cabri and his tribal wife to return with him to Russia. Cabri’s appearance caused such a stir, as the practice had never been seen by this generation of Europeans, that he was able to charge admission for viewing his ink at fairs across the country.

As most of these expeditions to this native, uncivilized locales returned, they often brought several natives with them. It was due to the ships returning with tattooed natives and sailors who sported their own tattoos that the practice became associated with the naval profession, a tradition that still lives on today.

One of the most influential voyages on the reintroduction of tattoos was that of Englishman Captain James Cook, who sailed to the Pacific Islands in 1768. He returned in 1771, bringing a particularly tattooed native with him. So impressed with his decorative appearance, Captain Cook introduced the native – named Omai – to King George V and his court. It is said that Omai made quite an impression on His Royal Highness, who shortly after had a Cross of Jerusalem tattoo placed upon his body during a trip to a Middle Eastern country. The Royal love of tattoos only continued from there, with King George adding a secondary tattoo – a brightly colored dragon on his forearm – during a dignitary visit to Japan. His children, both English Dukes, received tattoos in Japan as well, creating a family tradition.

Future Kings and Queens would continue to be tattooed, not just in the English court either. King Edward VII and Queen Victoria were rumored to have inking of their own, as well as King Frederick IX of Denmark, the King of Romania, Kaiser Wilhelm II, King Alexander of Yugoslavia, and Tsar Nicholas II of Russia. The practice, being spearheaded by the Royals of Europe, began to spread among the upper classes, reaching a peak in the 19th century and seeming to continue into what is now deemed the modern day tattoo culture.

While the Western world had some ups and downs with tattoos, it is clear that inking our skin is a natural process – despite the odds, despite the distances between cultures, and the ebbs and flows of the practice, it has continued. Tattooing is a surviving practice, one that has been utilized since the beginning of recognized history. So, celebrate your tattoos – they’re not just art work, they’re a nod to the past of human rituals and early civilizations. 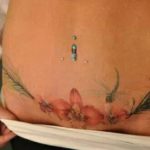