posted by Concha and Cucuy
System of Hate is an intense dark punk band from Barnsley, England. SOH formed in 2013 and has been raging across England ever since, playing with some of the biggest bands in the punk scene, including multiple appearances at Europe’s largest punk festival, Rebellion Fest. I caught up with bassist Shaun “Paddy” O’Neill to talk music and tattoos!
Hola Putos, this is Concha reporting from Rebellion Fest and I am here with System of Hate, an amazing band from England. Can you introduce yourselves for the readers?
Hello, I’m Paddy, I’m the bass player for System of Hate. We are from Barnsley, South Yorkshire in England.
And tell us about the band?
We got the band together about 4 years ago. It’s a very dark punk rock, sing a lot about religion, politics, death. We have a bit of dark wave to us.
Who are your biggest influences?
Joy Division, Ministry, Killing Joke. I’m going to say I’m a massive fan of U.K. Subs, but I grew up with them. I like the darker side and the crossover bands.
Who are you here to see here at this festival today?
We got a lot of bands, U.K. Subs. Today we will be watching friends Angelic Upstarts and really just go stage to stage. Looking at newer bands as well. We like to see new bands coming thru.
It is and I got to tell you, man, all I’ve been doing is running back and forth from one show to another, interview to interview. There is no sleeping at this Rebellion Festival.
No, definitely no sleep. It’s all drinking and no sleep. It’s 4 days of fun, it’s fantastic, amazing.
Yea, we can sleep later. So what does the band have going on now?
We just got a new album out now On Unhallowed Ground. Which is a fantastic album, absolutely amazing.  We’re very proud of it.
Awesome, you also have some videos on YouTube?
Yes, we have quite a few videos.We just had a full show of video at Black Bull near Newcastle.  Which is a great video, that’s on YouTube, anybody can get that.
Where can we get your merchandise?
You can get merchandise from the System of Hate site. If you put System of Hate into Google, it will take you straight the site. We send the merch right away.

Perfect and I see you have some beautiful tattoos. Tell me a little about them, when did you get the first one.
My first tattoo I got about 11 years old, I put on myself.
You put it on yourself?
Yea, I put it on myself, but that’s covered up now. Basically, over the years, I’ve just collected them and tattoos all over my body really.

You got them all over the world or you stay mostly in the U.K.?
No, I got all my tattoos in Northern Barnes from where I come from. An artist in Barnsley I like a lot who is also a punk rocker by the way as well.
Nice. And your first one, have you covered it?
Yes, unfortunately. Our singer took me for my first tattoo work at 15 years old and paid for it. Unfortunately, most of my early ones are covered.

Gotcha – as most of our first tattoos happened.  And you have ink only on your arms?
Just arms and legs.
Very nice. I want to thank you so much for interviewing with us and have a great time at the rest of the festival.
Interview: Shaun “Paddy” O’Neill – System of Hate was last modified: March 24th, 2017 by Concha and Cucuy
EnthusiastsMusic
0 comment
0
Facebook Twitter Google + Pinterest
Previous post
Next post 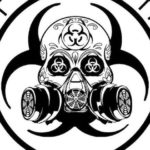