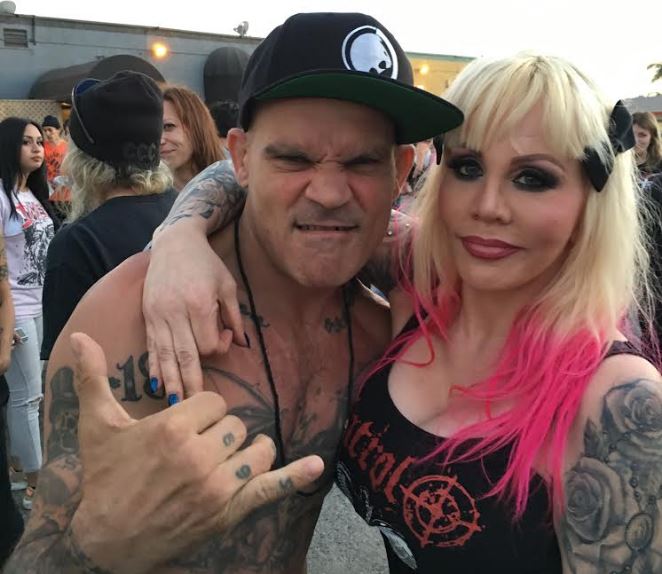 I was beyond thrilled to interview the one and only Harley Flanagan when he came to my hometown of Los Angeles. I caught Harley’s show before the interview and was completely blown away by my childhood idol. If you were a punk or hardcore fan in the early 80’s you knew who the fuck Harley Flanagan was. Harley lived the life we wish we had. Growing up on the streets of New York in the blossoming underground punk scene Harley was surrounded by legends like Joe Strummer, Andy Warhol, and Debbie Harry. Harley found international fame when he started his band the Cro Mags who went on to inspire a whole new genre of music…New York Hardcore.

Hey everyone this is Dana and I am here reporting for tattoo.com with my idol man Harley Flanagan, one of the founding members of the amazing Cro Mags and he came all the way out here from New York to play a show at Alex’s Bar and he fucking tore it up!! Harley how the hell are you?! We’re so happy to have you here!

We missed you man!! I was just talking with a good friend here and we haven’t seen you since 1985 Fenders Ballroom!

Oh man Fenders Ballroom, you guys know what the shit was all about. These kids these days they have no idea, especially out here man the shows were incredible! Fenders, I remember shows at the Santa Monica Civic, Long Beach was wild back then! I didn’t even know what to expect tonight, I know there a lot of young kids coming out tonight but I didn’t know if it was gonna be mellow kids or like crazy old school Sui’s and skins kids haha! I haven’t been to the west coast in a while I didn’t know how m-f**ker are rollin these days!! But I gotta tell you this was the most positive trip I’ve had out here, this was the happiest I seen people out here on the west coast. Back in the day, it was a lot of aggression out there and that was cool and everything but I’m really digging the positive vibe. I don’t like doing shows anymore where people are getting hurt unnecessarily you know.

Yeah that shit don’t need to happen no more man!

It didn’t even need to happen back then but it did and we lived and learned and now it’s our job to try and educate these kids to make sure they don’t repeat our mistakes.

That’s right! And so you actually came out here for a big festival that you played yesterday.

Yeah Sound and Fury Fest, it was a real good time.

Yeah and it was really cool cuz it was mostly younger kids like teens and early twenties and thirties. Today we got more of the older heads who maybe saw us back in the day. Yesterday it was a lot of the kids who maybe just heard the music but have never seen me. I’m sure there was a lot of people who thought I just disappeared but I had two kids I had to take time out to raise them. I couldn’t miss their childhood you know cuz I didn’t have my father in my life so I had to be sure I broke that cycle and do the right thing. But my kids are teenagers now so I can out and play some more.

Yep mine are grown up and at home and that’s why I’m out here too. But I gotta tell you, Harley, your performance was amazing, so full of energy, and you look great! You don’t age man! What the hell are you doing? Did you sell your soul to the devil or what!

Actually he’s my father in law! And I say that with nothing but love!

Haha! But you know what I don’t preach any type of diet or anything but I’ve been predominantly vegetarian for most of my life since like 81 or 82, and I’ve been training Jiu-Jitsu like 21 years.

Aren’t you a black belt?

Wow! That’s amazing! And you’ve been doing this music thing since you were a baby!!

Yeah, cuz in your book I read that you started off by playing drums for the Stimulators when you were 12!!

Yeah, I actually had been gigging in other bands before that. But that’s really why I play bass the way I play bass because my roots are in drums so I’m very percussive when I play. It’s me a style that’s unique. I learned a lot from Darryl from the Bad Brains and from Lemmy (from Motörhead), Rainey from Discharge, and even Kronos from Venom, I love him.

And when did you pick up the bass?

And are you all self-taught?

Yeah. I mean I was in the school band when I was a kid in Europe but it was really wild. We used to do Santana and Earth Wind And Fire covers. It was a crazy hippy school all the teachers were freaks it was wild! Yeah but check out the book people it’s nuts! You’ll definitely get some insight on not just the Cro Mags And New York hardcore and New York punk but you’ll get to see why I am the way I am.

And it’s full of amazing pictures and I actually suggested you write that book remember? Haha!!

Just so the readers know Harley was posting all these amazing pictures on Facebook and I was like “Harley you need to write a book!” And he’s like “Uhh, yeah I did…” My big blonde bonehead moment haha!!!

Yeah it took me a long time to write but’s a really great book. You all pick it up you’ll really like it, even if it’s just for the pictures. The pictures alone are amazing. It’s called “Hardcore: A Life of My Own” by Harley Flanagan.

And you have your solo album out which came out in 2016 and it’s called Cro Mags. It is unbelievable, man!

Oh, thank you so much. I was trying to bring it back to the old school.

You did a hundred percent! As Cro Mags fans and Harley fans, we’re thrilled! So what are you planning next? What are you doing?

Well when I get home I’m gonna work on some tracks with Mel E. Mel from Grand Master Flash and the Furious Five.

Oh don’t even think for a second he has lost his edge, that m-f**ker is tight! He is a bodybuilder and old as shit and will snap a dudes neck!

So you’re gonna play bass with him?

I wrote some tracks and we laid down some stuff but it’s different. It’s like OG hip hop OG Hardcore, the shits gonna be sick!

That’s the music of the streets, it spoke to all of us.

Yeah like NWA and all that, I’ve always affectionately called it the black man’s punk rock.

Oh exactly! Like I was just having a conversation with Ice-T not too long ago and we were talking about that we were out there doing and saying the same thing.

Just to a different beat.

Oh yeah and that’s no joke! Now let’s get to the ink, Harley.

Ok so my first piece is this skull which I want to say I got in 1980. It was done by Bob Roberts when he was just starting out and you see how well that shit held up. You can still see the cavities in his teeth!

You has that all them years??

Yeah, way before people were getting head tattoos I was way the fuck ahead of them. I also got work done by Kari Barba. She was one of the ones who really perfected that “fine line” tattooing early on. I mean most of my stuff is not up to par with what’s happening now and today’s standards but I’m a firm believer in it’s the person that makes the tattoo cool. Tattoos don’t mean shit, it’s the person underneath them. You can get a great tattoo and be an asshole and that tattoo has no value. If you’re a cool m-f**ker you could have a stick figure tattooed on you and that be a bad ass tattoo, you know, cuz your a bad m-f**ker. Tattoos are just ornaments. If you’re an asshole than that tattoo ain’t nothing but a decoration on an asshole.

Oh my God that is sick!!

When I play you can see it real well cuz it gets red when I’m chillin, it chills. When I get angry or pumped all of a sudden the shit jumps out.

Hey how painful was that?

Not as bad as an armbar.

And the back, Harley?

Oh, that was done by several different dudes.

I got more artists on me than I can even remember. Mostly in the states but you know I’ve been getting tattooed since 1980. Some of them are a little mangled and I got some shitty work on me

Yeah, but you got years on you and you earned it!

But like I said it ain’t the tattoos it’s the m-f**ker under them.

That’s right! Well, thank you so much for the interview Harley! It was an honor an a pleasure, please come back to Cali soon.

No thank you and believe me I’ll be back! 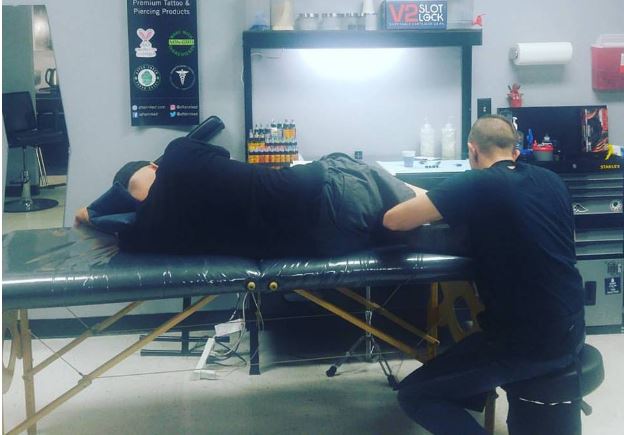 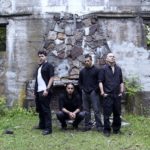