If you grew up in the 90s, then you have probably found yourself muttering the lyrics to “O.P.P.” and “Hip Hop Hooray” through the halls at school. It’s also likely that you didn’t really understand the meaning behind the lyrics. Regardless, Naughty by Nature have made a permanent imprint on the future of hip hop culture. Their continued success has garnered 25 years’ worth of late night television appearances, Billboard charting singles, Grammy Award nominations (including the distinction of Best Rap Album for Poverty’s Paradise in 1996), and so much more.

Naughty by Nature notably consists of its three original members including Treach, Vin Rock, and DJ Kay Gee. This year marks their 25th anniversary of the group’s conception.

Tattoo.com sat down with Treach to discuss the changes in hip hop culture, ink, and what fans can expect from future Naughty by Nature.

You guys are celebrating your 25th anniversary as a group. How do you feel about the development of hip hop culture over the years since you’ve been together?

I mean with all the development– that make me feel old! I been rockin’ this thing for 45 years? I’m like, “Yeahhhh!” I mean, I love it. Because with anything I do, I always root for the underdog. Hip hop was always the underdog music genre. Every time we come out, everyone be like, “Give it a few years, and you won’t be doin’ this no more.” Nope. We gon’ prove them liars. So the development make me feel like the urban kids– they’ve won. The world’s embraced it and  attached to it and made it a beautiful thing.

Hip hop has, at times, been notorious for being sexist and homophobic. You recently worked with Queen Latifah on your single, “God Is Us.” Have you experienced any kind of backlash from community, given her openness about her sexuality and her outspoken feminist qualities?

No, and never will, you know what I’m sayin’? Naughty, man– we don’t discriminate. Hip hop will be hip hop and what it do. But our family, friends, anything– whatever it is that they believe and they do on their own time with their love lives– our brothers and sisters still our brothers and sisters, so we love ‘em regardless. As far as hip hop, we get backlashes because we speak how we really feel. It’s like a “don’t bite your tongue” industry with hip hop. We practice freedom of speech a hundred thousand percent because we got the right to. Hip hop has always been rebellious, so there will be some sexist type rappin’ and different types of phobias, but when it comes to us– we accept people for who they are, and we know how we get down. It’s family. It’s love. Nothin’ wrong with that.

Do you feel that these prejudices are still fairly present in modern hip hop, or do you feel that people are becoming more accepting and accustomed to cultural differences with all of the changes in wound the world?

One thing we learned about every part of the world by being here as long as we have been is that everything evolves. I’ll never say, “Oh, this could never happen in hip hop,” because it’s so open to always changing. I feel like every ten years life has that new beginning. Hip hop has that new beginning. So it’s almost time to change again. It’s great to have so much diversity in the eras and in the songs. Hip hop is always changing. It never sounds the same.

It’s no secret that you are covered in ink.  Have you ever felt unfairly judged because of this?

It’s like, what kind of job does he have? He has those tattoos– he must be doin‘ somethin‘ else [laughs]. I think it’s more accepted now. Before, I noticed how some people would be a little more crowded on one side of the airport or a ferry ride, and it’s because they wouldn’t sit next to me. It was probably the tattoos along with how I was dressed, but I was in the spot with the most room. They may have thought I was just off the streets, like I might be up to somethin’– they say you can’t judge a book by its cover. I think it’s more accepted now– you see art all over all nationalities. Even with NBA and NFL sports– there was like a code or something. You couldn’t have tattoos. Now they have tattoos like their hip hop and rock stars.

Tell me about a few of your favorite tattoos.

Wow, I mean I have so many. It’s like my kids, man. I love all these little things. Well, you know I got Tupac on my arm. My first tattoo was a teddy bear in an electric chair and a little baby with braids, which stands for Naughty by Nature. I got a whole lot of deceased relatives, so those are special to me. My hood– 118. My kids, of course. I have “God is great” across my abdomen. My Jesus tat. And I love my Egyptian work. I named my daughter Egypt, so I love the whole ancient Egyptian thing. I have ancient hieroglyphics, Tutankhamun, pyramids– I got a lot. I stopped counting after, like, thirty. I go all over. I got tatted from LA to Australia. They addictive, man.

Check out Naughty by Nature’s single, “God Is Us,” featuring Queen Latifah. 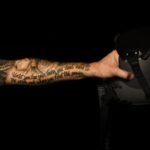