There is a perspective that tends to go unnoticed in a culture that thrives on routine and safety. Not to say that routine and safety are negative things. Tattoo artist and blood painter Vincent Castiglia is deeply in tune with this perspective on life and art that is so easily misunderstood. Finding beauty and truth in death, fear, and the thing that makes us all mortal– blood– is what Castiglia does best. Best known for his commissioned celebrity blood portraits as well as being the first American artist to receive a solo exhibition invitation from H.R. Giger, the humble yet stoic artist has much to be proud of in the realm of fine art as well as tattoo culture. Castiglia shared stories on his artistic upbringing just shortly after his Gary Holt (Slayer/Exodus) guitar exhibition at NAMM 2016.

Where did you get your start as an artist? What life events and experience contributed to your development?

From as early as I can remember drawing was something I did on a daily basis. Making art was a way to channel what I felt in a constructive way. Circumstances were not good growing up to say the least, so making art was the most powerful way of separating myself from my environment and creating a new reality. After a certain point, having been making art for so long, I knew being an “artist” was something I’d hoped to accomplish, professionally, but I believe the creative process really began as a by-product of my circumstances. It’s how I survived.

Your reputation as an artist is based heavily on portraits painted in blood, especially celebrity portraits such as Margaret Cho, who we have also spoken to. How did you first become involved in collaborations with musicians and other celebrities?

I’m all grassroots. I just started creating the work because I had to. And because the work’s existed for quite a while now, just by making the art, exhibiting it, and so forth, it’s visibility grew to the extent that somehow collectors such as Margaret, Gregg Allman, etc. found a painting of mine in front of them and saw fit to purchase or commission one. That’s as simply as I could answer that question in one response. The one major art event, which I’d cite as one of the best days and experiences of my life personally, was my solo exhibition at the H.R. Giger Museum in Switzerland. What made the experience even more surreal was that it was my very first solo exhibition. As an artist, I could have died then and been at peace (although I wasn’t trying to die at that particular point in time). Giger was my favorite artist, whose work I connected with the most out of anything I had ever seen. Growing up loving Giger’s work, surrounding myself with his posters on my walls, then having been acknowledged by him in this way was just mind-blowing for me. Beyond this, I’m just so very grateful to have known him.

You are also a tattoo artist out of your own studio in New York City called Arcanum. What percentage of your time is spent tattooing versus blood painting? Do you have a preferred outlet between the two? How do the client experiences differ?

It’s currently around 70/30, 70% painting, 30% tattooing, as I’m working on my new body of paintings titled, “Autopsy of The Soul.” Most of the time it’s 50/50. This body of work is my examination of the issues I believe to be at the heart of humanity in our present age, as well as issues personally important to me. The series also includes some private commissions by collectors. I enjoy and respect both art forms equally, as they each have their own beautiful and amazing nuances. But because with painting I have complete artistic license, painting is what I’d cite as my purest form of visual expression, because there are no specifications being dictated by the collector. Even with my private commissions, I don’t take on any projects that aren’t 100% in line with my work and aesthetic. The way I look at it, why else would I be creating art if not for a sincere personal communication of the things which are incommunicable by any other means? They’re allegorical expressions and psychic containers. Tattooing is its own incredible creative exchange, because I get to bring to life the client’s vision, and hopefully, imbue their designs with the most important elements of their personality or the things they value. My range of clients and collectors in both arenas span the whole spectrum– all types.

You recently showcased a guitar at NAMM 2016 designed for Gary Holt. Do you have any other instrumental projects in the works?

I’ve gotten many requests after this, which is great. But again, this was a very special project. There’s another possible project of this nature (and stature) in discussion, which I’m a little superstitious to discuss until ink is on paper. But, for the right price, I’d consider another instrument-painting project for those who aren’t yet Metal gods. Working with Gary was such an honor and pleasure, he’s just such an awesome human being and one of the most incredible talents in Metal music.

How has tattooing contributed to your understanding and appreciation for blood, and vice versa?

It has greatly contributed, in terms of its correct handling and sanitary precautions. Being a licensed tattoo artist in the city of New York, the first thing you have to do is learn about health. In fact, that’s what the entire tattoo license test is about, universal precaution, sterilization, cross-contamination, etc. So having to operate this way certainly helped and lent itself to the work that I do on canvas, although the inspiration for each is different.

Rather than paintings, you have described your work as “hemorrhages.” How do you address any criticism from those who aren’t as acclimated and comfortable with the concept?

I’ve described them metaphorically in this sense, because the definition of a hemorrhage is “an escape of blood from a ruptured (blood) vessel, especially when profuse.” My personal art– the work I do on canvas– occurred because the “pressures” of my existence were too much to bear for far too long until I, the “vessel,” ruptured (emotionally) onto these surfaces, using the singularly personal substance of blood. I don’t generally hear much criticism, oddly enough. I believe this is the case because the craftsmanship and thoughtfulness of the concepts can’t be disputed. I’m not throwing blood against the wall or smearing it around. These paintings take me hundreds of hours over the course of dozens of passes over the entire surface of the painting. But in the instances that I do hear anything, it’s either from those who’ve heard about the work but haven’t seen it yet, or others who haven’t known any significant suffering, so the work disturbs them and heralds the harsh realities that await everyone (infirmity, death, decay, etc.), which are more comfortable to avoid, try not to think about, or criticize.

What are your typical sources and materials used for blood paintings, and what are the safety procedures you employ?

The blood is collected intravenously into Vacutainer tubes. The tubes are refrigerated and used one by one as needed throughout the painting process. Approximately fifteen 3ml tubes are collected per blood drawing. I work from five different consistencies of blood contained in separate resealable containers, adding water and blood to each container as needed to achieve the desired consistencies at each point of the painting. These are sealed in small air-tight containers, which I paint out of. I work from “light” to “dark.” The first consistency used is mostly water with just a few drops of blood. With this, I paint the entire underpainting. The second contains more blood than the first. Likewise the third contains more blood, the fourth mostly blood, and the fifth is blood alone, which oxidizes over the course of the weeks or months painting (before I even touch it) and becomes an opaque pigment or thick “paste,” which can be activated with a few drops of water. This last opaque consistency is used to paint in all of the “darks” and complete the paintings. Every work surface is protected with plastic barriers and sanitized with Madacide after use. I joke all the time about this, saying my life is just one endless procession of barriers. The entire room is also bombed with the disinfectant fogger known as Sterimist after the completion of each paint, just to be a nut job about it. You could safely and comfortably eat off of my floors. 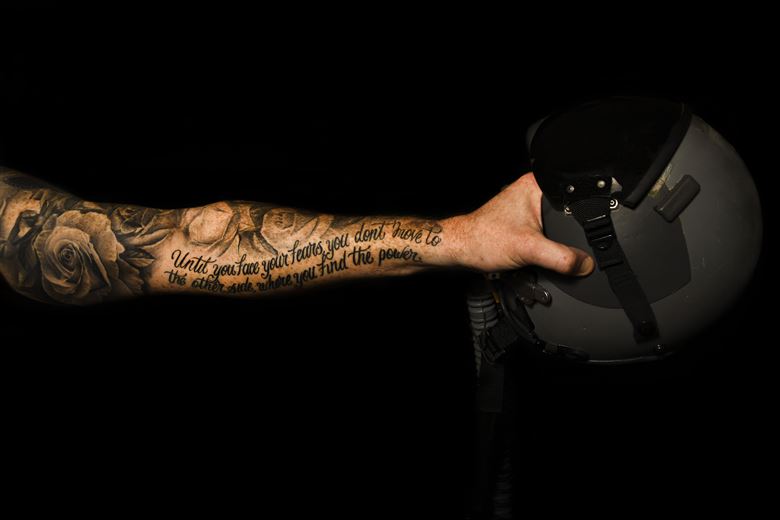 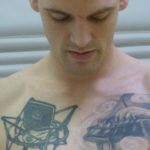