Early entertainment was an industry in which triple threats thrived. If you were a musician, then you were also an actor, a dancer, a writer, a politician, and so on. While metal and hardcore may not be the most traditionally influenced genres of music, the authenticity of talent within the scene as well as across the multi-media entertainment spectrum is alive and well. It takes a unique skill set to be able to translate otherwise difficult life events into tasteful, clever, and even funny material for the rest of the world absorb and relate to. Vocalist Keith Buckley of the Buffalo, New York hardcore band known as Every Time I Die is an exemplary figure in music, comedy, literature, and art in its entirety. He has shown true resilience, especially with the upcoming release of Low Teens, which channels real-time emotions from straining life events in real time. Buckley sat down with tattoo.com amid the 2016 Vans Warped Tour to discuss his new family, how he inserts himself in his music, and of course his stellar ink.

You are certainly a jack of all trades— from fronting a hardcore band to writing comedy, to being a father— how do you manage to balance all of that?

KEITH BUCKLEY: There is absolutely no balance to it [laughs]. There’s just— you do what you do at the time, one hundred percent.Then when that’s done you do what you do next, one hundred percent. If I was gonna try to cover all bases all the time I’d be spread way too thin, so it’s hard. When I’m on tour— I’m on tour, you know? I FaceTime with my daughter as much as possible, but I can’t even really let that sink in that I’m so far away from home. It’s pretty bleak, you know? I just had her, and I want to be home for her, but I gotta be at work. You just kind of have to focus on what you’re doing.

Your family went through a pretty rough time a few months ago. I know that with this new album, Low Teens, there probably had to be a lot of those emotions that were put into it.

Less than a week before everything happened I remember having a bit of a crisis and thinking, “I don’t know what I’m going to write about for this record.” Like, I didn’t really have any new material that wasn’t in the old record or in the book, and I just felt like I was kind of out of inspiration. Then it happened. And every song just takes place on that night, you know what I mean? It’s an overload of material in one night that’s not specific about that event but the thoughts that spawned from that event and the realizations I had from that event. It was a life-shifting occurrence that I had to try to use for good.

It must be a difficult craft to take those sort of life experiences and insert them into things such as comedy and music. What are some methods that you use to convey things in ways that are a bit more digestible for people?

You have to digest it yourself first. You just have to be honest and face everything that’s horrible and look really hard, directly at it, for a very long time and try to make sense of it. Once that’s kind of processed, then I think that it’s okay to share. There are a lot of people that can obviously do it even better than me and they don’t even put their processing on it. They kind of just share it as they get it. I think that those are the real geniuses, you know? I think those are the really brilliant minds in writing, performing, music, comedy, and all that stuff. I think those are the ones that are kind of sharing it with you before they figure it all out. The writing process with the record is definitely a lot more of me doing that— asking a lot of questions. I knew I didn’t have anything figured out, so that was a much different approach, whereas the other records were me sharing my results and findings after thinking about it for like a week. With Low Teens I didn’t find anything yet. It was all happening so fast. My approach this time was definitely to sort of let everyone in on it and help me figure it out too. Live streaming.

You obviously have a good share of tattoos. Do you have any that are dedicated to your wife or family?

I got one when we got married, and I got Zuzu’s initials on my fingers. I have more from earlier. Like, when we were dating I got this little martini glass with my wife’s initials, because when out for a martini on our very first date. We went to a place called Rendezvous. It’s no longer open in Buffalo, but it was a very quaint little spot. Yeah, we had martinis and it kind of became our thing. Not that martinis seem like such a wealthy man’s drink, but they were cheap [laughs]. That’s why we enjoyed them while we could. I kind of feel like this whole record, lyrically, is dedicated to them. So the stuff I write is hopefully just as proven as the ink I could get, if not more so.

What about some other ink that you’re proud of?

I just got one two days ago by Craig Beasley out of Tallahassee, Florida. It’s got like this weird skin on it to protect it. I had this huge space on my side, and I kind of wanted a beehive pattern underneath. I don’t know, I’m just kind of obsessed with beehive patterns. So he drew it up, and it was cool, but he really made it cool with this fading.

What about your first tattoo?

I have this band of skulls from my friend John, who is now my go-to guy at Hand of Doom up in Buffalo. When he was first starting off and we were like twenty, he said that if I let him practice on me, then if he ever became really good he was just tattooing me for free for life. And I don’t think either of us expected him to become as good as he did or as affluent as he has. He’s opened like two shops and has one in Vegas. So now I’m really holding it to him [laughs].

What was your reaction the first time you ever encountered an Every Time I Die fan tattoo?

It was a lot of pressure. It still is a lot of pressure. I do understand that some someone could love something so much to get a tattoo for it because I’ve gotten tattoos for my wife and stuff, but to love something that I do— I feel like it’s a lot of pressure on me [laughs]. I feel like I have to keep going and keep making it, you know? Like if someone gets an Every Time I Die tattoo and something horrible happens to the band in some scandal, then they would be like, “Oh shit. Well, that’s not what I got the tattoo for— that’s not what it stood for back then.” So it’s just a lot of pressure to keep doing what we’re doing and not get sidetracked by the bullshit. Everything ends. We just hope the end of us is at least something respectable. It is amazing. It’s very humbling. And I’m so self-deprecating that I don’t really ever feel like anything I do is worth something like that, so it’s a weird dynamic for me when I see that.

For more information on Keith Buckley and Every Time I Die visit the official band website. 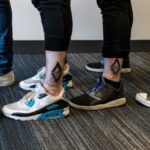