One of the greatest things about attending Tattoo Conventions across the US is the unique personalities you get to meet. Recently, I had the pleasure of catching up with artist Justin Coppolino at the Tampa Tattoo Arts Convention. One of the cast members of Oxygen’s hit show Tattoos After Dark, Coppolino has a track record of impeccable work and a great attitude – not to mention, he’s got a case full of trophies to back it all up. 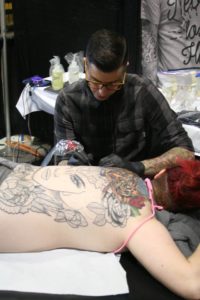 Check out our quick Q&A session, where we discussed what it was like being on television, his previous career, and what it’s like balancing being a parent with being a tattoo industry giant.

Let’s start with the typical interview question first. Can you tell us a bit about yourself, how long you’ve been tattooing, and what style you favor the most?

I am 37 years old and grew up in Philadelphia, Pa with my identical twin brother. I have always found myself choosing the creative path in life. My brother and I started a band called Still Standing in 1998 and in 2004 took it to Los Angeles to try our luck. It was rough in LA, but we stuck it out and eventually got a record deal years later, and did some touring.

Meanwhile, I took on an apprenticeship and fell in love with every aspect of tattooing. It was more of a calling as it came at a time when I needed it the most.  I was falling apart sleeping on couches and just drifting in California not really knowing my place in life. 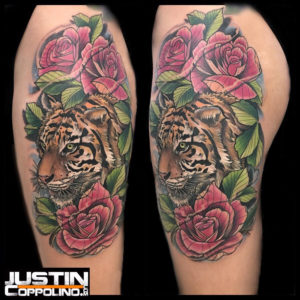 The style of tattooing that I lean towards most, is neo-traditional if you really want to label my style. I try hard to do my own thing but it’s challenging in a world with so many amazing tattoo artists. Although, I wouldn’t have it any other way.

When you think back on your childhood, did you always want to be involved in the arts or was
it something you found your way to later in life?

I definitely was a very creative kid. I loved coloring books and drawing books.  I didn’t have my own style at that time.  I would just draw my Ninja Turtles and He-Man characters.

My mom recently showed me a report card and it stated “satisfactory” next to all my classes except for art. Art had an “O” for “outstanding”. My attention was clearly better in that class but it wasn’t until I found tattooing that I truly dove head first into the art world.

Our readers may recognize you from your feature on the television show Tattoos After Dark.
Can you tell us a little about how you found yourself on the show and what it was like to film
your work days (er, nights)? 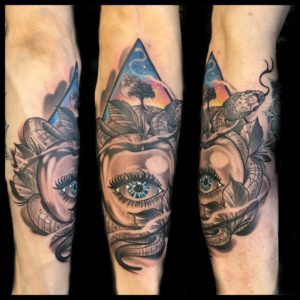 I was working in Los Angeles in Venice Beach when the production team for Tattoos After Dark were scouting for tattoo artists. They were going shop to shop and I did an interview with them. Months later I was called in. I was very hesitant at first because I didn’t want to lose respect from any fellow tattoo artists for doing a TV show, but my wife pushed me and reminded me to not worry about what others think. It was a great experience and at times, a very frustrating one.

About two weeks into filming I suffered from Bells Palsy which is paralysis of the face. I had an ear infection that I did not know about and my nerves just stopped working on the right side of my face. It looked like I had a stroke.  I was so stressed out about it.  I found a great acupuncturist and he got my face to start moving again within three weeks. I’m glad that I followed through with filming the show and I wouldn’t change it for anything.  I learned a lot about people and I learned a lot about the TV industry.

What fans of your tattoo work may not know is that you used to be a musician. How did you find
yourself segueing from touring with Alice Cooper to tattooing full time? Is music still a big part
of your life?

Music has always been a huge part of my life and through it all, I’ve had amazing experiences. I’ve toured with many bands including Alice Cooper. Four years ago, I signed a publishing deal in Nashville and I was flying back and forth writing songs with some great people for a solo project that I was doing called Next Planet.  You can check it out at SoundCloud.com/next-planet.

Through my music career, tattooing has always been my solidarity. It has funded my travels and given me the fuel to keep going. 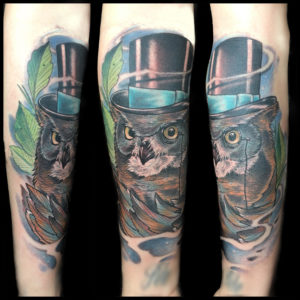 You’re quite heavily tattooed yourself. What’s the most important/meaningful piece you have
on you? Do you have any “just because” tattoos?

I have a lot of “just because” tattoos. When I started to get tattooed, not many around me were getting meaningful tattoos.  I was getting tattooed because the art looked cool. I have a middle finger on my right knee cap with the number 2 and my brother wears the finger with the number 1.  He was born first.  That’s pretty meaningful, haha. I also have “be one with god” written on the webbing of my left hand so that I can have a reminder when I need it the most. I will be getting my daughters name soon and I have my wife’s initials on my finger.

Every tattoo artist has an off-the-wall funny story about a client, a situation, or a tattoo that has
come across their chair. If you had to pick a story that strikes you as the funniest of your
career—what would it be?

I have had many experiences with people passing out and peeing or throwing up. Usually, it’s a laughable one in the end but definitely all serious matters. The funniest experience would be when I convinced my buddy, who I was tattooing a beach scene on with palm trees on his stomach, that “crabs” on the sandy beach near his crotch would be a great addition to the tattoo. He wanted lobsters so we were going back and forth but I pushed for crabs and I even drew one that had a magnifying glass looking down.  To this day, I still don’t think he gets the irony but I think it’s funny.

Okay, this question should be a good one for you since you are a musician yourself. When you
tattoo— do you find you have to have music on to get into the swing of it? Is there a particular
genre of music you prefer to listen to? 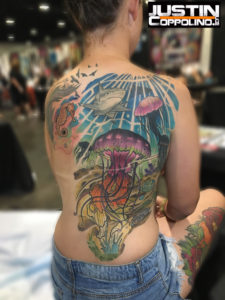 I love music and it definitely sets a mood in the room while tattooing.  I don’t really have a preference because I like all kinds of genres. I do like to listen to pop (Jon Bellion). I just can’t take screaming music while I’m tattooing.  It’s too aggressive and I can’t focus.  It actually pisses me off.  In the end, I can definitely tattoo without music and do not need it to get into a tattoo.  I also use Dab Tattoo Cream during my process of tattooing. It contains lavender essential oil so it helps calm down the mood for the client and myself.

What is one of your biggest pet peeves in the industry?

I have a couple pet peeves with this industry.  1. Artists that wear headphones to ignore their clients and everyone else around them. 2. Owners of shops that aren’t tattoo artists. 3. Owners/artists that do not give back to this industry and just continue to take, take, take from it. Go buy a piece of art or do something to support someone else!!!  There’s more but I don’t want to go on. 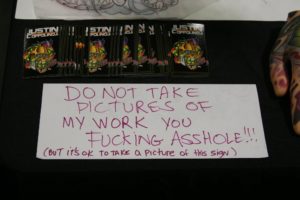 You travel the convention circuit quite a bit—what is the hardest thing about traveling vs being
in a steady shop? What is the easiest thing?

The hardest part about traveling is being away from my family and the easiest thing is being around all my friends on the circuit.

Tell us a little about your home life. Do you have any hobbies that aren’t tattoo-related? Pets?
Family? Anything else we might find interesting?

Home life is awesome. I have 1 1/2-year-old daughter and a wife that keep me on my toes. They take up most of my home life and I love every minute of it. We explore Seattle together and always find cool things to do outdoors. I love to sing to my daughter and play guitar. Sometimes I get a little too serious and try to write a hit song, haha. I get my artwork done when I’m at the shop or traveling. I love to do art on canvas/watercolor paper with markers and paint.

If you could tattoo anyone, living or dead—who would it be? 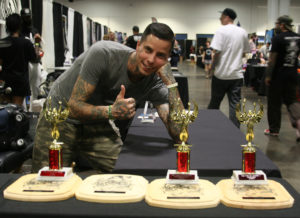 I would tattoo my dad (aka Tony Santoro). He wasn’t my biological father but raised me and my brother. He passed away when we were 14 years old. I would feel so honored to show him my accomplishments by tattooing him.

Some people and places still view tattooing as a “nuisance business.” How did your family react
when you announced you were beginning a tattoo apprenticeship?

My family has always been my biggest fans. Their support in my life is a huge part of why I have such strong passion and drive. They never had to look down on my choices in life because I haven’t given them a reason to. 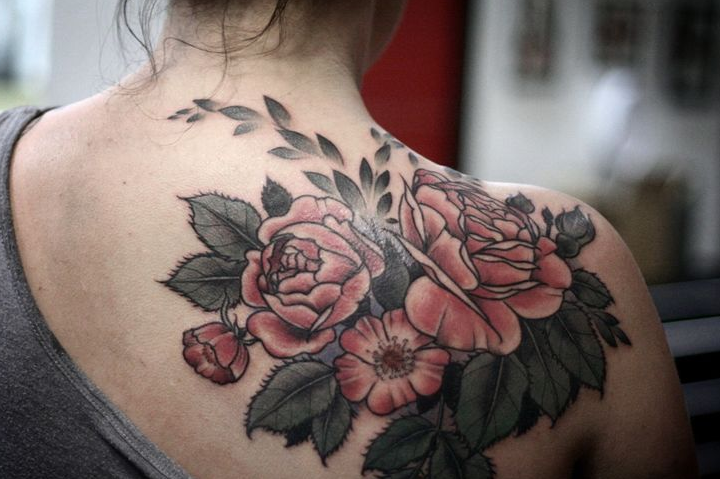 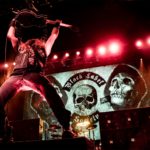