Home Interview A CONVERSATION WITH RUST AT REBELLION FEST 2016
InterviewMusic

A CONVERSATION WITH RUST AT REBELLION FEST 2016

posted by Concha and Cucuy
Rust is an amazing Oi/Street Punk band from Australia that first formed in 2005.  Their music is hard, raw, and unrelenting, with an intense live performance that few bands can compare with.  Not only does RUST deliver an amazing performance, they are phenomenal musicians with skill that can only come from veteran rockers.  RUST broke out of Australia and have toured throughout Europe and the U.S. with some of the biggest names in punk rock including the Exploited, GBH, and the Dead Kennedys.

Hola putos this is Concha reporting for Tattoo.com magazine and I am here at Rebellion with most amazing Aussie Oi band Rust! Let’s go around and please tell me your names.
Rust: I’m Gaz I’m the lead singer, I’m Bevynn I play guitar. Darrin Worsley plays bass and Sean Smurf is on drums.
I gotta tell you I seen you guys twice, you amazing and the energy is phenomenal! I had to put a video of your performance on Facebook, I hope we can get you to America very soon, but if not I’m going to come to see you. Now tell me who are your biggest influences?
Gaz: Mine would be Motörhead, the 4 Skins, and Rose Tattoo.
Bevynn: For me Rose Tattoo is definitely a big one, AC/DC, Billy Thorpe and the Aztecs, the Saints, Radio Bourbon, all Aussie stuff.
And tell me who are you here to see? Who are the biggest bands you want to see at Rebellion?
Gaz: I’m gonna see Argy Bargy tonight and Discharge. There’s too many I got a bad memory but I gotta a program and I’m gonna make my way around and see all my favorites.
And you Bev?
Bevynn: Oh there’s so much. Tomorrow I’ve got a meet and greet with Cock Sparrer for my birthday so I’m totally stoked about that, and I’m really nervous too!
Wow that’s a hell of a birthday present man, wow!
Bevynn: Yeah I get to see their sound check as well
Wow very cool!

And who have you met in your past Rebellions cuz I know you’ve been here a few times. What number is this?
Gaz: I’ve been here eight times.
Bevynn: I’ve been here two.
Wow so you’re kind of a virgin like me. I got devirginized last year. It’s wonderful to be coming here. I think I’ll be coming here every year.
Bevynn: Did you like having your virginity broken?
It was very good! It was a little painful but I liked it!
Bevynn: Haha! I like it too!
Haha!!

So tell me what’s next for Rust? I understand you’ve been here about a month and you’re gonna be doing a tour here?
Gaz: On Tuesday we fly out to Germany, then Czech Republic, Holland, Belgium, Prague.
Wow that’s so amazing. That’s the one thing about being in Europe you’re so close to all these countries. Have you been to Europe and toured before?
Gaz: Yeah we did a couple of shows in Berlin and in Holland two years ago but it’s really uncharted waters. We’re going to towns we’ve never heard of so its big for us.
Bevynn: A couple of years ago I did it with Gaz and the boys but a few years before that I did it with another band called the Core from Australia, which heavily influenced by Rose Tattoo, but yeah it’s a lot of fun.
And tell me when you play at home do you play all over the country?
Gaz: Yeah we go in state a couple of times a year but you don’t wanna play too much at home you know, it’s a small scene, so if you do it a couple times a year, go down to Queensland or Melbourne that’s plenty. This is where we get our fill you know, we go away and we come play our asses off!
And that you do man, that you do. You guys are phenomenal! And so you guys just came out with a new album yeah?
Gaz: It’s an EP it’s called ‘Skins and Punks’. Some of the songs will be on our next album. Rust has been going for a little over 10 years now and the new album will be called ‘A Decade of Corrosion’.
And where can we get your merchandise man?
Gaz: In the states Long Shot put it out, in Germany Randel and STP Records in the UK.

And let me talk to you boys about some of your ink because you boys have a lot of tattoos and they’re amazing. When did you get your first tattoo Bev?
Bevynn: When I was about 25.
Is it covered, cuz everyone always covers their first tattoo?
Bevynn: Actually I did a home jobbie myself, it was a Black Flag on my knee and it looked terrible so I had to get it covered up with my bear.

That’s awesome, they did a great job on that cover up!
Bevynn: Yeah well the singer in The Cores is a tattoo artist as well so I get mate rates.
Nice nice! You get the band hook up!

So tell me what was your first one?
Bevynn:  on my shoulder here, it’s very fuzzy
And have you gotten these tattoos from different parts of the world?
Bevynn:  yeah this one is from New York

And this one is from New Zealand. Some people collect tea tables and teaspoons I collect tattoos!

Awesome! I like collecting like that man! You’re my kind of collector! And so umm…do have tattoos everywhere? Any where we can’t see them?
Bevynn: umm yes I’ve got some on my ass
I love it! I love ass tattoos!
Bevynn:  I’d show you right now but…
Don’t tell me! You have MOM tattooed and when you bend over it says WOW! Hahaha!!
Bevynn: I wish I had thought of that!

It’s pretty good huh! Ok Gaz let’s talk about yours. You got some beautiful tattoos, I see some traditional stuff here
Gaz:  Yeah I got my first tattoo when I was 16. I was underage it was at a place called “Ned Kelley’s” in Sydney. They didn’t care how old you were. He wasn’t a very good tattooist so it’s covered up. I was shitting myself. I got in lots of trouble, the old man kicked me out.
Yeah I can relate. I had to cover mine for years for the same reason. And I still don’t hear the end of it man! My mom is still telling me shit! And I’m no spring chicken!
Gaz: Well I’m 49 and my father doesn’t talk to me because of my lifestyle so f**k it!

That’s crazy! That’s bullshit! So tell me what you got going on here? Which one is your favorite?
Gaz: I love my RUST one. I’ve got a big angel on my back.
I saw that when you were performing!
Gaz: Angels are probably one of my first loves and as a very young kid I got put on to them by one of my mates older brothers. So I got that a couple years back and that’s my biggest. I got Motörhead, a couple rock n roll ones. Last resort, Rose tattoo.

That’s the best man! I love it! You collect them from all over?
Bevynn: Tough stickers! You ever heard of that saying?
What does that mean?
Bevynn:  It’s an Australian thing. That’s what people call tattoos “tough stickers”.
Ahhhh I like that man! I gotta take that back home! That’s very cool! Well thank you for the interview boys! We hope to get you to America very soon. You come I take care of you! This is Concha signing out for Tattoo.com
Follow RUST on Facebook
A CONVERSATION WITH RUST AT REBELLION FEST 2016 was last modified: November 27th, 2017 by Concha and Cucuy
0 comment
0
Facebook Twitter Google + Pinterest
Previous post
Next post 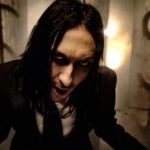