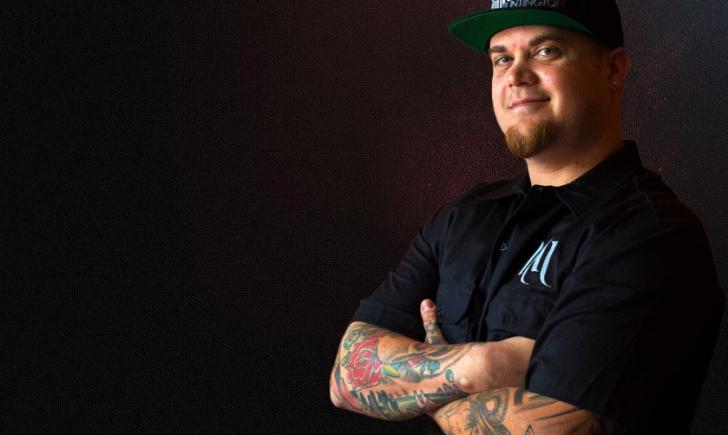 Nate has been at H&H for just about a year and a half now, but he’s already making a name for himself across the industry. The New Smyrna native has been tattooing for only about nine years, making him a relative newbie in the fold. Although he’s only been in the tattooing game for just shy of a decade, art has been a big part of his entire life.

“My grandfather was the president of a bank,” said Nate. “But when he would sit down with pastels, it was amazing.”

Nate’s family is filled with artists and musicians, so he says he’s always been exposed to the world of art. 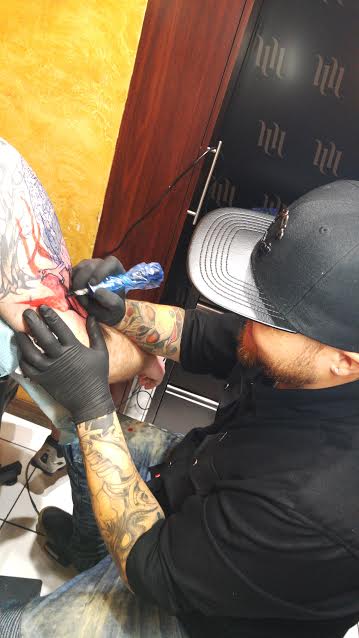 Nate found his way into tattooing by chance, not by desire. At the time he was a man of odd jobs, working as a DJ and doing web design to make a living. A friend, who did most of his tattoos, noticed some of his drawings lying around his house and started pushing him into the industry. Starting as a piercer, Nate eventually gave into the hounding of his fellow co-workers and jumped into the practice of tattooing head first, stopping everything else completely.

Working at a ‘bike shop,’ as he referred to it, Nate learned quickly that speed was his best friend. The shop was insanely slammed during the two week period of Florida’s famous Bike Week and it was every artist on deck and hustling for this event. Nate’s skill matched his speed, making him a force to be reckoned with.

After several years in the industry, Nate quickly realized where he wanted to be and began his pursuit of a coveted spot at Hart & Huntington Tattoo.

Now, Nate is one of their top artists occupying a full-time position at the high volume shop. His color work is impeccable, with saturation so crisp you feel as if you’re looking at a photograph. His lines are sharp and his speed is mind-blowing. The up and coming artist turns out full-color sleeves in eight hours. I was able to witness one of Nate’s epic tattoos during my time in the shop: a cover-up piece of a half sleeve in just less than four hours from start to finish.

During my visit, I was able to chat with Nate about a few personal and business-related topics. The high caliber artist spends his off-time having ‘art days’ with his three-year-old daughter, who has exhibited his same love of art at such an early age.

“I collaborate with my daughter almost every day,” he stated. “We have full daddy-daughter-art-days.”
In addition to spending time with his daughter, Nate claims he enjoys working with his saltwater reef aquariums, playing guitar and/or drums, going to the beach, airbrushing, and hitting the range with his buddies.

“Of course, I also enjoy cars, bikes, and trucks,” he chuckled. “You know—the usual stuff.” 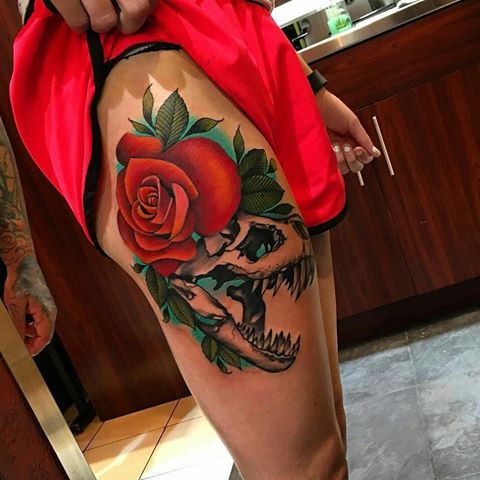 Spending time with Nate, it was obvious that he’s a laid-back kind of guy who tends to enjoy cutting it up and having a good time. He was all smiles, happy to be at a job he loves so much. Out of curiosity, I had to ask what his favorite go-to playlist was, as it’s a question I tend to ask all the artists I meet.

Hart & Huntington Tattoo of Orlando is home to many world-renowned artists, and currently, they’re harboring the next big thing in tattooing—Nate Needles.
“Oh, ‘80s freestyle all the way,” he said. “Like Stevie B, stuff like that. It keeps up the energy. Nothing slow gotta keep up the momentum.”

My next prying question focused on his speed, because, let’s face it… it’s impressive.

“I only have one speed,” he laughed. “I think its repetition. Working during Bike Week, for a 14-day stretch, you get quick.”

Yet another of my favorite questions was next… did he prefer coil machines, rotaries, or cartridge pens?

“I line with a coil, shade with a rotary,” he said. Of course, he’s no stranger to the pens, either. 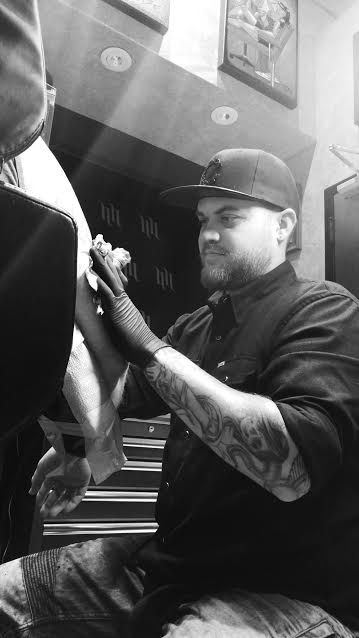 We got to talking a little bit more and the subject of style came up. I was curious if he had a specific style or if there was something in particular that he wouldn’t do.

“I just do whatever the client wants,” he stated. “I don’t want to only do one thing. I don’t want to belittle the clients.” Nate told me that he enjoyed learning and studying the practice and that he learns a lot from his co-workers. “I try to learn from everywhere and build a tattoo that will last. It’s a bummer to restrict yourself to one style.”When it came to what he wouldn’t do, he draws the line at any tattoo based on racism or hatred. Everything else is free game.

I asked if he ever had to coax clients into different placement or designs because of how it would wear over time. He explained that at Hart & Huntington, they get a lot of high-end clients. “They want to have it done perfectly,” he stated. “Sometimes you’ll redraw a stencil sixteen times. You just have to be patient and understanding. If it’s not quite what they originally wanted for whatever reason, you just have to make the drawing so badass that they fall in love with it.”

When you talk to anyone at the shop, you’ll hear nothing but praise for Nate Needles. His personality, his light-handedness, his speed, and his impeccable artwork catapult him to the top of the “Must Watch” list for up and coming tattooers. If you’re in the Central Florida area, whether as a resident or as a tourist, getting inked by Nate Needles is a must-do for you bucket list!

To book an appointment with Nate Needles, visit http://www.hartandhuntingtonorlando.com/