Carolina Rebellion 2017: A Festival for the Music History Books

Carolina Rebellion ended with Music lovers reveling in a well-earned hangover brought on by an overdose of great music, food, fun, and shenanigans. As always, all good things must end and that to was the case with Carolina Rebellion 2017.  With 3 days of music that included: Soundgarden, Amon Amarth, Korn, Papa Roach, Volbeat, A Perfect Circle, Eagles of Death Metal, Three Days Grace, Skillet, Tesla, and many others, this was a festival for the music history books.

Some people ask, what can I expect from my festival experience? Well for those who like to play music as well as see music, they could stop by the Music Experience where you could rock out on an instrument.  If you are like me and the only instrument you can play is the radio, there’s always FYE on site to scoop up all the music you can take home with you. Feeling adventures? Hop on the ginormous Ferris wheel and see the stages from the best seats in the house up high in the sky.  Thirsty or need to get your grub on?  Well food alley was always close by and of course no music festival is complete without Jack Daniels & Bud Light, but if adult beverages are not your cup of tea, Monster is always on hand to quench your thirst and get you going for a full day of festival fun.

The best part of any festival, in my opinion, is experiencing it. When I say I saw countless mosh pits, body passing, sitting on shoulders, tits out, and fists in the air, I knew that all of those fans were not just watching the show – they were experiencing the festival. Another way to experience it for fans at Carolina Rebellion included meet and greets with the bands at the FYE & Music Experience tents. Yes, that is right, you can actually have a chance to chat with your rock or metal Gods in person at most of these festivals.

With VIP lounges and camping, Carolina Rebellion had you covered. You could party, rock out, and be on site in the camping areas.

As for the music on day 3, some of the bands included:

The Charm The Fury – this is their first ever American tour. Catch our interview with the Danish Metal Diva Ms. Caroline Westendorp coming soon.

Soundgarden –  Chris Cornell’s voice did not disappoint – the entire band put on an unbelievable performance.

Three Days Grace is back on the festival circuit in U.S. Check out our interview with drummer Neil Sanderson as we talk tours and tattoos, coming soon.

Detroit’s very own Citizen Zero is back and we caught up with them again, almost exactly a year from our last interview with them at Rock on the Range 2016.  Keep an eye out for their interview and check out their fresh ink.

Skillet made their appearance this year was at Carolina Rebellion.  Despite having some tour bus problems on the way to the festival, we were able to talk with lead singer and bassist John Cooper for a few minutes on camera. Check out the interview, coming soon to Tattoo.com

Papa Roach is always one of our favorites, not only because of what they do on stage but also because of who they are off stage.  Get to know guitarist Jerry Horton as we talk about the new album (out May 19th) and tattoos, coming soon to Tattoo.com

Volbeat is one of our favorite rock bands, and even though they toured extensively in the U.S. in 2016, we always seemed to miss them.  It was awesome to finally get our Volbeat fix at Carolina Rebellion 2017.

Coheed & Cambria, again (we saw them a few weeks prior at Las Rageous) put on a stellar performance.

If The Offspring ever dropped off your musical radar, seeing them live brings back loads of memories and you can’t help but sing along to virtually every song.  Every time I see them perform I fall in love with them all over again.

As always, occupy a live venue, support local music to help your local musicians make it to these giant festival stages across the U.S. and internationally, and get your festival on. Be sure to check out all coverage of Carolina Rebellion from ROCKwell UnScene at Tattoo.com. Horns up and see you in the pit soon. 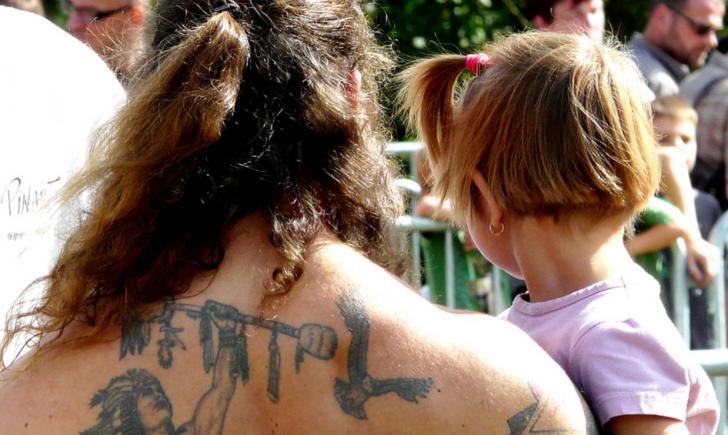