Bullet for My Valentine… Most of you know their music or at least some of their hits, but to really appreciate one of the hardest working bands in the business you’ve got to see them live. Fortunately for us, we saw them several weeks in a row starting with Carolina Rebellion in Charlotte, NC, and finally at Rocklahoma in Pryor, OK where we had a chance to spend time with founding member and lead guitarist Michael Paget. Here’s what he had to say about their new album, touring, and his ink…

Mel: Hey everybody it’s Mischievous Mel here at Rocklahoma 2016 and I’m here with (Michael Paget from) Bullet For My Valentine! Introduce yourself and tell us what you do in the band.

Michael Paget (Patch): My name is Patch and I play lead guitar for Bullet For My Valentine.

Mel: I have been listening to your music for a while now and I heard the new album ‘Venom’. I’m struggling with which one I like the best. What has been the fan response to the new album?

Patch: It’s been really really good. It’s been the best response we’ve had on any album since ‘The Poison’ so that’s really good. It’s a great direction for our band, I think we’ve sort of gone back to our roots. Everything’s good, we’re playing some big festivals this year in America and Europe and all around the world.

Mel: You guys must be tired. I’ve seen that you’ve gone back and forth from her to overseas and back again.

Patch: Yeah no rest for the wicked. We have two and a half days off after a five week tour, then we go out for another two weeks. Then I think we have another two weeks off then but we after that we leave for a European festival run. We don’t stop until September 11.

Patch: I know, I know. It’s gotta be done though. When you release a new album you have to back it up with a tour cycle.

Mel: I really liked what said about going back to your roots, that’s what I really thought when I heard it.

Patch: Yeah that was the idea. We spent a lot of time on pre-production just dissecting the songs and making every one of the notes and drum hit as best as we can. I think that’s what really made the album what it is; the time spent on the pre-production. We didn’t go in and record it for like eight weeks and it made it really easy once we got to that point.

Mel: From top to bottom it’s an excellent album. Let’s talk about ink.

Patch: I have a long sleeve on so I can’t go to high, but this is from a guy back home who pretty much tattoos us all. My jester of doom holding the eyeball open, then it sort of goes into this half skull thing. Then I have a lot more eyeballs here. This one here is a girl’s eye and that’s a dude’s eye. I think it’s a dude’s eye, I never asked him.

Mel: Do you have any plans for any other tattoos in the future?

Patch: Yeah I’m hoping to get this finished if I ever get off tour – Just get a full sleeve done and then go for crazy ones; stupid meaningless nonsense.

Mel: Are you going to get any color or are you staying with black and white?

Patch: I’ve got a little bit of color at the top here but mostly just black and white.

Mel: If I wasn’t such a lady I’d tell you to take it off and show us.

Patch: No the lens would break if I took it off.

Mel: Well I tried, but I want to take you for your time and have a good rest of tour here in The States and Overseas! 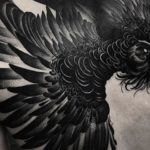