Pop Evil fans, did you make it out to Carolina Rebellion? If you did not, let me just tell you…the band killed it on stage. Now that I have rubbed salt in your wounds, let me make it up to you by sharing the interview Pop Evil did with Rockwell UnScene and Tattoo.com. This was one of the “hotter” interviews we did. That’s right. Pop Evil definitely puts the ‘sexy’ in Rock.  Be sure to catch them on tour now.

Mel: Hey this is Mischievous Mel at Carolina Rebellion with the one and only Pop Evil’s…
Matt: Matt DiRito. This is my first shirtless interview of the day.
Mel: You guys are going everywhere and playing with a lot of bands, can you tell us some backstage shenanigans that you think wouldn’t be appropriate for the public?
Matt: It’s still a little bit early in the tour season. We just started this round of festivals, and we just started a tour with Rob Zombie and Disturbed. So it’s a little early for shenanigans. It’s been a lot of boredom and riding my skateboard around.
Mel: You guys are back there knitting and stuff.
Matt: Yeah, you know, we’re doing each other’s makeup and nails and stuff like that. It’s what we do.

Mel: I ask because most people ask boring questions, but some people want to know what happens back stage, what kind of cereal you eat and if you wear underwear or not.

Matt: Okay, cereal  I don’t eat at all. I have, I think, American flag undies on right now. The Patriotic side of me. Backstage I usually stand around, smoke cigars, and check my phone religiously. I’m almost out of cigars so I’m down to a pipe now.

Mel: Can you tell us what Pop Evil is up to right now and where you’re going to be next?

Matt: We just started festival season so we’re hitting all of the US festivals. Last year we did all of the European ones, so this year we’re doing all the US ones. We’re out on the road right now with Rob Zombie and Disturbed. So tomorrow we’ll be in Nashville with those guys, and then later this summer we’re going out with Three Doors Down. They’re taking us all around the US and over to Europe.

Mel: What bands are your favorite to tour with?

Matt: This tour right now. I love Rob Zombie, so watching them basically throw a huge party on stage every night is amazing. We’ve done a lot of these festivals recently with Sixx AM, and just seeing Nikki Sixx walk around is pretty cool. I’m a huge Motley Crue fan, that’s kind of one of those wild moments. Every time I see him, I’m not sure if he’s real or not, and I’m not sure what to say or how to talk to him.

Mel: Tattoos. We are with Tattoo.com and everybody wants too see your ink.

Matt: Yeah, I’m with Sunburnt.com today, but take a look for yourself. I started out with this who was the singer of my first band, but he moved away so I don’t get ink from him anymore. My first tattoo was a bat across the top and he did that. I found a guy down in Louisiana to kind of fill in my chest, and AK’s are my favorite.

Mel: It looks like it was all done at the same time, very well done. Why a bat?

Matt: You know, “Bat Matt”.  A little nickname from being a kid. I’ve always been into Vampires and stuff like that.

Mel: So what is your next tattoo going to be?

Matt: I have a handful of ideas, but it just depends on what artist I land with and who can do what.

Mel: Do you plan on doing color at all or are you going to stick with just the black?

Matt: I have a little bit of color on my legs, but for the most part just black and grey. That’s my favorite.

Mel: You guys just dropped some new music, can you tell us about that?

Mel: Thank you, we’ll see you on tour! 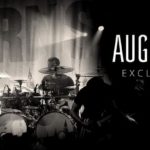