August Burns Red… once you see them live, they might become your favorite new metal band. Their epic performance at Carolina Rebellion created a massive buzz amongst both fans and media outlets. So, what makes August Burns Red so incredible? Huge pits, larger than life sound, and a powerful performance that rocks your soul. As a huge fan myself, there aren’t enough words to describe how excited I was to hang out and chat with members of the band at Carolina Rebellion. They told us about their music, their ink, life on the road, and more. Take a peek for yourself.

Mel: Hey everybody this is Mischievous Mel here on day three of Carolina Rebellion, and I am here with August Burns Red. Can you introduce yourselves?

Jake: My name is Jake Luhrs and I’m the lead singer of the band August Burns Red.

Dustin: I’m Dustin Davidson and I slap the bass.

Mel: How does it feel to play Carolina Rebellion?

Jake: Well we’ve never played Carolina Rebellion before so this is exciting for us, and I’m actually from Columbia, South Carolina, so it’s kind of cool to be close to home. This is an amazing fest, there’s a lot of great bands and we’re excited to show everybody what we bring to the table.

Dustin: Yeah it’s going to be interesting for us because we just got off a tour where we were playing an hour and ten-minute set and now we’re going to be busting out the hits in a half an hour under the hot sun. It’s going to be like Warped Tour in that sense; the stages are similar, we’re outside and there’s dust everywhere, which I know Jake hates. The worst part about playing outside is the dust for him because he’s screaming.

Jake: Yeah it can be difficult.

Jake: Thank you, it took me sixteen years to get it like that.

Dustin: Yeah we used to beat him with sticks. “Pronounce the word better!”

Jake: I don’t really want to talk about that… (laughs)

Mel: I call you guys a “crossover band” because you get both the younger fans and the older fans. How does it feel to be one of those bands?

Jake: We worked really hard to be in the position that we’re in, and what I think people appreciate about us is that we’re not just a trend band. We don’t just say, “Oh this is a trendy thing to do so we’re going to add it into our music.” We always told ourselves that we’d be leaders, not followers and so we’ve been consistent throughout the ten years that we’ve been a band. I think that older people or younger people can go to see us and they’ll say, “I’m not really a huge fan but I respect the fact that they’ve been doing this for ten years and they’re still going all out.”

Mel: I liked all of that except for when you looked at me when you said “old fans”.

Dustin: It’s okay. My grandma is the oldest fan of the band. She’s going to be turning 70.

Jake: We know a guy is in his sixties and he has seen us in like 20 different states. He just flies to our shows to see us and he makes his own August Burns Red shirts.

Mel: You guys have some tattoos here, can you tell me all about them?

Jake: A lot of my tattoos are really faith-based. Actually, I have a really crazy story to tell you about this one in particular; my hand has a lion on it. We were on tour in 2011 and a kid comes up to me after a show and says, “Hey man, I think you’re really bold. Like you have the heart of a lion or something.” I said, “Thanks, man, it’s really awesome you would say something like that.” I think it was six or seven months later and we were over in Europe and some kid said the exact same thing to me at a show. I just thought that was kind of weird, you know? Then someone said it to me again so I kind of took this as understanding that to be bold or to be brave and to stand up for what you believe in. Don’t let fear consume you.

Jake: I gave my life to Christ when I was 20 years old and I have this tattoo that says “Your Life Forgiven”. It’s really just for me to understand that as a person I make mistakes and I’ll think I’m making the right decisions – but then I’ll realize that my decisions were stupid. But to know that I have grace for myself and that grace and God will arrive when I continue to screw up. That’s what that tattoo means. I have so many, I have one on my lip.

Jake: It says “PVDQ” and that’s for all of my friends in the band called Destroy the Runner from California. They all had that lip tattoo and they said, “Oh you’re a part of this family now so you have to get this lip tattoo,” and I didn’t want to get it. After like the fifth time of me hanging out with those guys in their hometown, I just went down the street and got it done.

Mel: Can you explain that experience?

Jake: Well it’s like putting a cube of ice in your hand and letting it sit there; that icy-cold burn. That’s what it feels like on your lip.

Dustin: I got my lip done too and I didn’t think it was that bad but it only lasted like three minutes. I teared up. It’s a matching tattoo for me and my best friend. I rushed to get my arm finished because when I was 18 I wanted a bunch of tattoos. The whole tattoo, I say, is based on love because I have “Love” on my wrist. I want to love everybody.

Mel: Your music kind of brings that out.

Dustin: Yeah. I feel like I share a connectedness with everybody and that we’re all in this together because we’re all humans. We’re tiny in relation to the universe, it’s crazy. But anyways, I have a pocket watch here that points to 4:26, which is the day that my uncle passed away. He was in a motorcycle accident. I like to get tattoos like that to remember my friends and family and stuff like that. I have a hummingbird on my right calf wrapped in a teal ribbon that says “Forever In My Heart” for my aunt. She passed away from ovarian cancer.

Dustin: I have the liberty bell because I love Philadelphia team sports, and then I started a sleeve on my left leg. So it starts at my foot and goes the whole way up. It’s of a video game. I know you’re going to say it’s nerdy but I love The Legend of Zelda. I would come home and fight my mom over who got to play the game because my mom got me into it. It was a bonding experience for my mom, my brother and myself. I would come home, do my homework and be like, “Mom! You’ve been playing all day, I wanna play.” It was a big part of my childhood so it’s sort of a nerdy bond that we share together. My brother has a lot of Zelda tattoos as well. I was going to do my whole leg but my tattoo artist passed away, so I have to have somebody else finish it. I have this whole thing planned, but I don’t know if I’m ready to find a new guy. I haven’t decided if I want to go on. He was a good friend of mine so if I get it done I want to sneak one for him in there with it. I take my time now in trying to find something that has a lot of meaning to me.

Mel: I like that. Some people just get drunk and put tattoos on their body.

Dustin: I haven’t done that yet…

Mel: One thing that Tattoo.com does is they’ll match you with a tattoo artist in your state that would suit you.

Mel: Good luck on that. I’ve taken up too much of your time, so thank you. Is there anything that you want to shout out that people can find you at?

Jake: Google August Burns Red, and check out our tours. We have a ton of tours coming up in the next year.

Dustin: We have a bunch of tours coming up after this summer, but we can’t say anything about those yet. 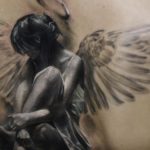