Ancient Britons: The Most Recognizable Tattoos of History

When examining the history of the tattoo culture, the varied beliefs and uses are astounding. When you look at their function in ancient Egypt to their banishment in Greece and Rome, tattoos have meant so many different things to so many different cultures. But while you’re looking at their usefulness or their stigmas across history, it is hard to overlook one of the most important locations in the history of tattoos – Ancient Briton.

Consisting of the British Isles, the ancient Britons were a fierce people. Tribal in nature, there were many different tribes – including the Celts, the Gauls, the Goths, the Teutons, the Picts, and the Scots. Much like the Thracians, what little is known about this race of earthly tribal communities has been recovered from writings of the ancient Romans, who invaded the Isles for the first time in 55 BC. In 50 BC, the infamous Julius Caesar wrote, “All Britons paint themselves with woad, which turns the skin a bluish-green colour, hence their appearance is all the more horrific in battle.” Sound familiar? Of course it does – I’m sure the image of Mel Gibson, full kilt, sword raised above his head screaming “They will not take our Freedom” has surfaced in your head. And, despite some minor theatrical alterations, this image is exactly what Caesar described. The Britons were ferocious warriors – destined to battle for their land to the death, as they had done for many, many years. In fact, historians surmise that some of the tribes in the ancient Briton culture had survived from 7000 BC to around 875 AD. During this time, they became quite pride – donning their signature knot-work in ink format on their bodies. They used a substance called woad, which left a blue-green pigment to the skin, and marked intricate designs consisting of knots, braids, spirals, and other labyrinth like designs.  These designs were often believed to simulate life – the connections, patterns, and steps that appear within a single life form.

Within these complicated designs, one could find representations of animals of every kind. Despite there being many different tribes across the Isles, they all were extremely in-tune with nature, the Earth, and the life cycles of all animals, plants, and people. This devotion to the Earth and its creatures makes a clear imprint on the forms of tattoos the tribes utilized. Herod of Antioch, during the third century, described these body markings, stating, “The Britons incise on their bodies colored pictures of animals, of which they are very proud.” This boastful attitude towards tattoos was a shock to the Romans and Greeks who visited, as they believed that tattooing was for penile punishments only and should not be looked upon with pride

To create the indigo ink, the ancient Britons would collect the leaves from the woad plant, a member of the cabbage family. While yellow flowered at bloom, once dried, powdered, and fermented, the leaves provided a rich bluish green tint. The process of fermenting the leaves involved diluting with water and urine. The resulting powder essentially becomes insoluble in water and alcohol. Thanks to modern testing of this material, we now know that it is also insoluble in ether and diluted acids; however, the most shocking discovery is that the crafted powder actually contains antibiotic properties, which explains how such a crude method of tattooing, with little to no sanity methods involved, was able to be carried out with minimal infections and the tribes were able to cover much of their exposed bodies in copious amounts of art. Unlike many tribal communities before them, the ancient Britons employed tattooing as a national pastime as such – think baseball, but much more hardcore. In fact, the name Pict, which was used to reference the northern tribes in the region now called Scotland, translates loosely to ‘to paint.’ Given to them by the ancient Romans, the original title was ‘Pictii,’ which means ‘The Painted Ones’ in Latin. This method of tattooing entire bodies was so popular that the original name used to describe the country, Britannia, stemmed from a word used by the Celtic tribes translating to ‘Land of the Painted People.’ 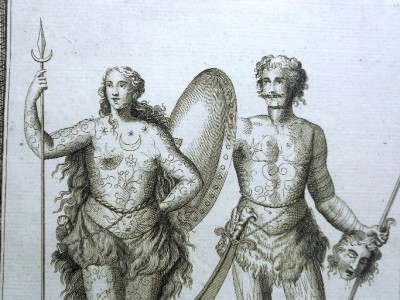 Of course, entire Isles full of brightly colored tribes were quite shocking to those who visited the country and references to the Painted People of the British Isles have appeared across history. Aside from Julius Caesar’s references in the Gallic Wars manuscript, word of the inked tribes have appeared in such places as Amores, a series of poetry books written by Roman poet, Ovid in 23 BC.

It’s as though I’m not at Sulmona

on the farm where I was born,

but far away in Scythia, wild Cilicia, woad-painted Britain,

or perched on Prometheus’ murderous crag.

They appear in  De Situ Orbis, penned by Pomponius Mela – a Spanish born geographer – in 44 AD. In this work, he details the process, but states no clear reason as to why he believes they partook in such activity. The painted Britons appear fifty years later in the longest Latin poem ever written to date, the Punicorum. The 12, 000 verse poem is an extravagant depiction of the Hannibal’s exploits, military accomplishments, and the many tribes encountered during the famed second Punic War. Of the ancient Britons, the author – Caius Silius Italicus – had this to say:

Even so the woad-stained native of Thule drives his chariot

armed with scythes round the close-packed ranks in battle. These feared, inked tribes of ancient Briton go on to appear in many, many works of text across the world throughout history. Their infamy, which stems both from their gruesomeness in battle and the eccentricity of their full body art, resonated across the world – giving tattoos their first recreational feature and the Britons a startling reputation. These stunning people still appear in modern cinema and text, as well as continuing to arise in historic bodies of work being discovered and translated every day. And, let’s not forget, their renowned tattoo designs are still being utilized in modern day tattoo parlors worldwide. 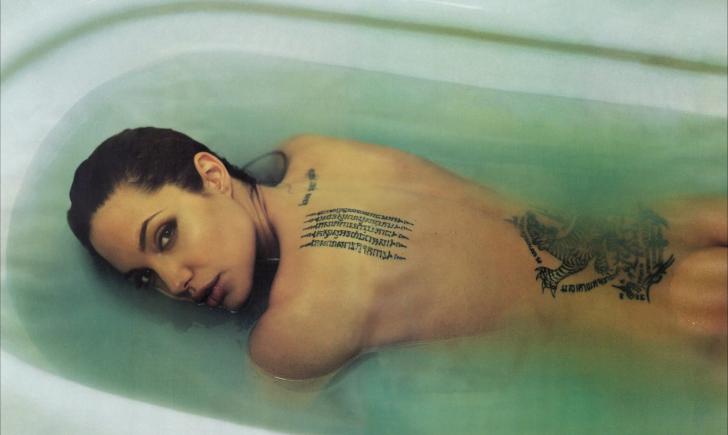 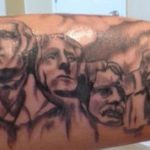