The Swedish influence has a strong hold on the metal and hardcore scene as the 5-piece band better known as Heartaches gears up to release their newest EP titled Svart on August 12 via Artery Recordings.

The blistering sophomore EP is a vicious transformation piece that solidifies the band’s placement and future on the playlists of hardcore lovers. The title track, “Svart,” is a disturbing electronic instrumental build up to track two, “Backyard Tree,” which barges in with grating screams, gargling guitars, and beefy drums.

“Svart” is the Swedish word for “black,” which is what this EP conjures– blackness and purely dark energy. Vocalist Casper Frisk’s name is amazingly appropriate and while the irony makes it comical. The fair skinned and blonde haired screamer belches his aggression while visually contrasting the otherwise evil and grim aesthetic.

Tracks such as “Ruthless” and “Deathlist” offer diminished industrial guitars that rage above the slightly distorted and buried vocals. For metal enthusiasts in need of a wall punching soundtrack, Svart is the abrupt and abhorrent collection for the next time you anticipate a violent outburst. Heartaches will help you release your fury. Just don’t hurt anyone. 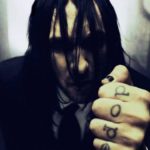