Album Review: ‘Madness’ All That Remains

posted by ROCKwell UnScene
Forged in the minds, hearts, and souls of Phil Labonte – vocals, Oli Herbert – guitar, Mike Martin – guitar, Aaron Patrick – bass, and Jason Costa – drums of All That Remains is “Madness”, the band’s 8th studio album to date.  I have had a chance to take a listen and if you indulge me I’ll tell you why it’s going into my must have albums stack and why I think you should add it to yours when the album launches.
All that Remains came into the music scene as an underground death metal band. Over the past 15 years, they have evolved, choosing to use other types of music other than death metal to create a menagerie of sound that is the perfect mix of pop, rock, and caustic metal-core. The sound that is All that Remains is a true reflection of the criticism fired back at the band for leaving the death metal scene. All that Remains is doing what they have always done and is playing. writing and making the music they want to. As the band puts it “We are writing and playing whatever the hell we feel like.. the music we’ve written has been reflective of that and I think the lyrics, the ideas, have always been reflective of that as well. We have one objective – to create great songs that come straight from the heart,” says Phil.
You could say that their sound is their attitude.
“Madness” is playing in my ears right now as I do this review. I confess I have played it from top to bottom already and I am on round 2. Yes, it is that damn good. I will tell you a few of my favorites and why.
The softer side of me wants you to take a listen to “Far From Home” This track speaks to the side of me that loves deep lyrics. It is bursting with emotion and it is a good listen.
“If I’m Honest” is another of my favorites on this album. Harder than “Far From Home” but still on the softer side. I really am ecstatic about the depth and meaning of the lyrics in this one as well.
“Never Sorry” gets to the harder side of sound for those hard edge fans. Starting out with what makes you think it is a hard rock song then throwing in the amazing screams of lead vocalist Phil. Yes, this song reminds those critics that “All that Remains” still has the balls and talent and skill to be metal when they choose to be.
The title track “Madness” is one of the best songs I think because you will get another dose of your hard rock fix on this one. But as always, don’t take my word for it. Listen for yourself.
Now that I have shared my favorite tracks on “Madness” let me tell you when you can get it. Save the date: April 28th Razor & Tie will be bringing you the “Madness” from All That Remains. 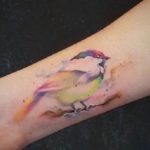