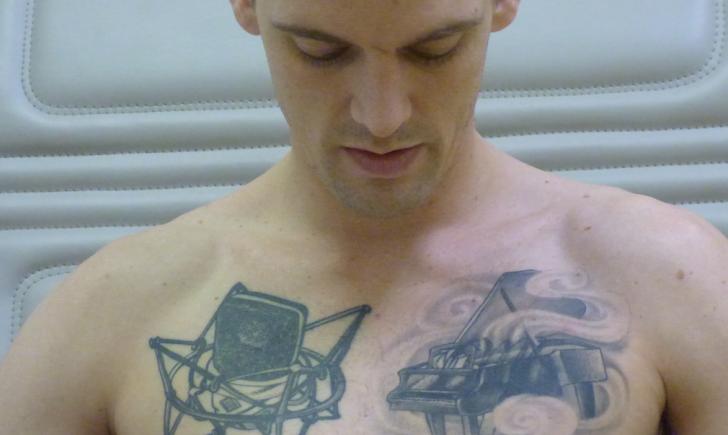 “Oh Aaron”, isn’t just the name of Aaron Carter’s 2001 album, it’s the first thing that popped into our head when we saw his brand new tattoo earlier this week. In an effort to ditch his 90’s heartthrob image, the singer is inking up a storm.

It seems like the pop star is taking a page from Justin Bieber’s playbook by inking his new album name on his body. Aaron’s fifth studio album titled “Love” is set to release later this year, but that didn’t stop his tattoo from making an early debut. The new tattoo shows the word “Love” surrounded by flames on the side of the singer’s neck. Aaron showed off his new tattoo at the Grammy Awards this past week and due to its large size, it was kind of hard to miss.

The singer received his first tattoo when he was just fifteen years old and since then has added and subtracted to the collection. In fact, is 2015 Aaron released a YouTube video of him getting some of his tattoos removed without any numbing cream! From the looks of it, it seems that the singer never went back for more removal treatments since many of the tattoos he had worked on are still very visible.

Sources say that the singer received his new artwork at Chapter Tattoo in Orange, CA and took about three hours to perfect. But it doesn’t stop there, apparently, Aaron is going in for daily touch-ups, lasting up to ten hours a day! The 27-year-old has recently confessed that by stopping in for his daily visits, he hopes to have his entire body covered in tatted up in no time. We will believe it when we see it but apparently next on the agenda is something a little more Mike Tyson style. We can’t imagine the once tween idol sporting a face tattoo, but we can’t wait to see it if and when he does!

Honor Your Furry Friend with a Pet...