They Live is one of those classic movies that never gets old, and doesn’t age terribly. The theme has to do with the rich and powerful wielding unfair control in plain sight is a relevant one that we can all relate to. While in this movie, the rich and powerful are actually aliens, the feelings of hopelessness and helplessness remain the same. The desire to overthrow the malignant powers that be will always be the struggle and perhaps the victory of those struggling beneath them. Secret societies, subliminal messaging, secret gadgets and truth-seeking sunglasses are all part of what makes the movie what it is, but more importantly, the chemistry between the two protagonists George Nada and Frank Armitage played respectively by Roddy Piper and Keith David, is a friendship based on more than common interest, but on a common effort to expose the truth. If you’ve never seen the movie before, please do yourself a favor. It will become one of your absolute favorites. Just bring lots of bubblegum.

Are you a fan of “The Live” and have been thinking about getting a tattoo of your favorite scene or line from the movie? Check out these 10 eye-opening “They Live” tattoos for ideas and inspiration:

Remember this iconic scene in the movie? “OBEY” is seen everywhere in the movie, tricking the average person to remain complacent and not ask questions.

Here’s a kewpie version of the aliens, which is undoubtedly creepier than the original!

This tattoo is especially for the Seekers of the Truth.

What do the powers that be love more than anything out of the general public? Apathy.

“They Live We Sleep”

Here we see Roddy Piper after that epic and somewhat comical fight he has with Keith David in the alley, wearing, of course, the infamous sunglasses.

What would you do if you found out that most people around you actually looked like this and were controlling your every move?

Look at the polish of this They Live tattoo!

Here’s a black and grey version of the creepy alien. 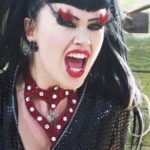